As you know, I am Marshall Zablen, Medical Director of Norton Medical Industries. We have specialized in drug testing to meet federal, state and local requirements since 1989.

Drug testing trends and the safety concerns with rideshare drivers have arisen because of this new class of providers of ground transportation. Prior to the formation of transportation network companies, individuals looking for transportation would primarily use taxi cabs and limousine services. Rideshare companies classify their drivers as independent contractors who operate with minimal requirements-with one requirement requiring the driver’s car to be less than 10 years old.

Taxi cabs and limo drivers are required in the State of California to have a random drug testing program for drivers similar to the requirements of the US DOT.

Norton Medical wants to share these drug testing trends with our book of business for recent years. Taxi cab drivers in California in Los Angeles, Orange County, Riverside County and Marin County are clients of Norton Medical and are currently in a random testing program.

This means that 1 in 644 taxi drivers in this pool were positive for marijuana, cocaine, opiates, or other illicit drugs.

In 2015, Norton performed on employed limousine drivers. There were 5 drivers that had random test positives.

The rate of positivity was .005

This means that 1 in 200 limousine drivers tested positive for illicit drugs.

The positive limo and taxi cab drivers were immediately removed from the pool and were not allowed to transport riders.

What is the rate of illicit drug use in adults in the United States?

The National Institute of Drug Abuse (NIDA) survey found that 8 to 25 percent(varies based on age, see graph below) of Americans between the age of 20 to 40 admitted to drug use in the past month in 2013.

Using  statistics from NIDA, we can infer that the rate of drug use in the general population is approximately 25 percent. This means that roughly 1 in 4 ride share drivers can have a positive drug test.

These numbers are realistic because in the trucking industry in 1989, 18 percent of commercial drivers had a positive finding. The Federal Motor Safety Administration, who regulates truck drivers, has released numbers that have proven that the rate of positive drug test in this population has fallen to 1 driver in 100. The rate of fatalities in commercial regulated drivers has fallen more than 80 percent for every one million miles they drive.

Testing of ride share drivers can be a very simple process using US DOT Certified laboratories at a very low cost for the Independent Ride Share Driver.

Norton Medical has created a working cell phone application that lets drivers enroll in an anti-drug program, get pre-employment test, random drug test and random alcohol test, and post accident test for $99 per year. That is $8.25 per month.

The application can notify the driver that he needs a random drug test or a random alcohol test via text message, email, and voice phone call.

The driver gives permission for results of the test to be emailed to his contracting entity – be it a limo company or a rideshare company as well as any state regulatory agency such as the California Public Utility Commission.

Dr. Marshall Zablen and Norton Medical Industries has been endorsed by the Greater California Livery Association to promote drug testing for all drivers who transport people in the State of California. Dr. Zablen has met with California Assemblyman Kansen Chu, who after evaluating the need for safety and the low cost to the public, is proposing a law next year to require rideshare drivers to meet the same safety drug and alcohol standards as the limousine and taxi industry.

Below please find 2 window sticker designs that we can offer Limousine and Taxi Companies to show their riders how they differentiate from rideshare drivers and TNC’s. 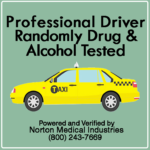 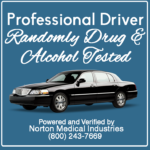