Breath Alcohol Technicians are trained to perform breath alcohol tests using US DOT approved equipment. Alcohol breath analyzers are accurate to .001 measurements.
Workers covered under the DOT are prohibited from drinking 4 hours before beginning the covered job. That is 4 hours bottle to throttle. Covered Workers regulated by the FAA have the same prohibition. All Flight crew are prohibited from using alcohol 8 hours before beginning their covered job.

In most states a .08 alcohol is considered as being under the influence and impaired.

In the DOT world a .04 level is considered positive meaning the worker did not follow the prohibition of not drinking alcohol for 4 hours before beginning the covered job.

If alcohol test returns at .02 to .039 the worker cannot be allowed to do his covered job. He must be sent home. If the worker has an alcohol test below .02 he is allowed to perform the covered function. Random alcohol testing should be performed before, during or immediately after the covered job.
Alcohol is a legal substance in the United States. The prohibition is 4 or 8 hours for aviation flight crew before coming to work, while at work and breaks and lunch. A worker can be tested at the start of work, during work, and immediately after completing his covered job. A worker who is not doing the covered job such as driving a school bus cannot be tested for alcohol.

The minimum rate of random testing for alcohol is 10 percent. That means if you have 100 workers in the pool you are required to do 10 tests per year. If a company wishes to test more there is no upper limit for alcohol testing.

Did you know that a driver is prohibited to consume alcohol 4 hours prior to working? As the saying goes, “4 hours bottle to throttle.” 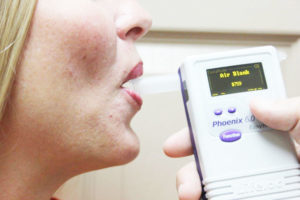